It’s like The Daily Post has been choosing writing prompts just for me lately. So, I’m writing this post in response to the writing prompt “The New School.”

You get to redesign school as we know it from the ground up. Will you do away with reading, writing, and arithmetic? What skills and knowledge will your school focus on imparting to young minds?

In jest, I have said many times to my students that if I win the lottery I’m not coming back because I don’t understand those people who don’t have enough imagination to do anything except keep working at their same old jobs after gaining wealth beyond their wildest dreams. One thing I don’t lack is imagination. And while I probably would not keep my same job, I have fantasized many times about starting my own school if I ever struck it rich. Here are some of the ideas that are most dear to my heart in my dream school:

I freely admit that my specialty is limited to the upper grades, so I would SA would be grades 7-12. I would not do away with any of the subjects we have now because students need a broad exposure to different fields in order to find out where their interests lie. I would, however, approach them differently. I would insist in more real-life applications for every subject. One day a week would be Cross-curricular Day. Teachers would coordinate with their colleagues to demonstrate how the subjects connect. No, I haven’t worked out the logistics: It isn’t a real school. Yet. 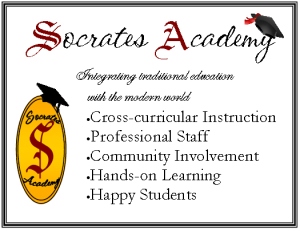 The problem associated with the isolation of subjects is illustrated by how students often do not see the relevance of chemistry. Everything is chemistry; life is chemistry. But when it is just a series of formulae or isolated experiments, they can’t see that. Last night, I made a cake with buttermilk sauce. When the sauce is cooked, baking soda is added, and the sauce foams, tripling in volume. That’s chemistry students could get into. Why does gravy lump? It’s fascinating on the molecular level. I’m an English teacher, but I recently watched a documentary on mathematics that made me wish I were young enough to become a mathematician. Yet every day, students tell me math is irrelevant and boring. No subject is inherently boring; it’s all about how it is presented.

Good for Students and Teachers

So what has to go?

This brings me to what I would do without. This one won’t be popular. I would no longer interweave athletics into the school’s curriculum. Students would have fitness instruction, but that’s all. They would learn about how to be healthy; this would include a combination of book work and physical activities. Even in my relatively isolated region, students are able to participate in club sports and community teams. I’ve seen the tremendous benefit some students get from participating in sports, but I’ve also seen the flip side: obsessive focus on athletics that shuts out academics. I’ve know students who have had great fun participating in more esoteric sports such as crew or rugby by finding these community-based opportunities. A smaller school would waste too many resources trying to offer this kind of diversity in athletic opportunity. SA would help students find teams and be supportive of them, but would not take our focus off academic pursuits.

Now, you know I love the Arts, so you’re asking about them. Art appreciation is an academic pursuit, and we would teach it just like fitness. Students would learn appreciation and theory as well as having the opportunity to sing, dance, act, paint, sculpt, etc. Again, though, we have community theatre, chorales, and music programs. We have craftsmen with whom students can apprentice. Encouraging students to participate in community events would strengthen ties between school and community.

If wishes were horses, beggars would ride.

And if I could redesign schools, students would learn in fully-funded schools where learning is relevant, and teachers are treated like the professionals they are.

My vision of an ideal school makes school more relevant to the students and helps students see their roles in the local community as a pathway to seeing their roles in the world community. I didn’t mention Common Core of TNReady at all. But this doesn’t mean that I would abandon all pre-existing curricula. My school would be in Tennessee, so I would still address the standards the the public schools address. My students, after all, have to be competitive in the real world, not a fantasy one. I’d love it if public schools could be this way, but that is not going to happen any time soon, so even in my fantasies, so this is a private school. I would start a scholarship fund with some of the winnings so that tuition would not prevent anyone from being able to attend. Of course, if I could wave a magic wand, this would be the new public school paradigm.

This was composed in response to The Daily Post’s writing prompt: “The New School.”

3 thoughts on “If Wishes Were Horses”

Check Out My Classroom Blog

I have been a high school English teacher for over twenty-five years. In 2015, I was honored to be recognized a Kennedy Center/Stephen Sondheim Inspirational Teacher Award. I love teaching and getting to know my students. I believe education is the only hope for individuals, communities, and the world. When I'm not working, I love music, television (shhh.. don't tell my students!), mystery and science-fiction novels, great coffee, and interesting food.

Sshh, Maddy is Writing
It's A Study In Life

Chronicles of an Anglo Swiss

Welcome to the Anglo Swiss World

Pain goes in, love comes out.

The trifles, baubles, and bric-a-brac that strike our fancy

Welcome to the Feline World of Nera, Tabby and Fluffy